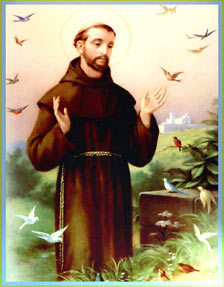 St. Francis Assisi is the Patron of Our School. He is born in Assisi, Italy in 1181. In keeping with the trend of the time Francis, a highly popular romantic, sought knighthood-and passionately So! Francis joined the papel forces in late 1205 in Apulia a Vision at Spoleto bid him return to Assisi. He encountered a voice “Serve the master rather than the man” that was the start of his conversion. He passionately search to know God’s will for him. He began to preach the very simplicity of his life and teaching drew around him many wealthy people. Francis named then ‘little brothers’ ready “to follow the teachings of our Lord Jesus Christ and to walk in his footsteps”. Francis is known as ‘Second Christ’, ‘a lover of nature’ ‘a Social worker, an itinerant preacher and a lover of poverty’. He loved the universe all its creatures – like birds, animals retails and practiced Universal Brotherhood. He is known as the Patron of Ecology. St. Francis imitated the life of Christ and to carry out so literally Christ’s work in Christ’s own way. He was blessed with the imprint of the five sacred wounds of the crucified Lord on him- the first recorded stigmatization.

School at a Glance